Mick was enrolled at what was then called Farnham Art School aged 13 on one of the last junior art courses still running. He stayed at Farnham for 7 years the last 2 specialising in ceramics under Paul Barron, Henry Hammond and his tutor Ron Hackney.

Mick left Farnham in 1966 to start his career as s as a potter. Mick’s first job was with Chris Harris in the Cotswolds making traditional slipware, he then did a bit of teaching, had a studio on the end of Eastbourne pier, and worked for Kate Weaver in South Croydon. At Kate Weaver’s studio Mick worked with Bill Jones an ex Pool Pottery thrower who re trained him in production throwing.

In 1970 Mick started work for Grayshott  Pottery who were just changing from earthenware to stoneware, he was employed to design and make a new range of thrown stoneware. Mick stayed at Grayshott until he set up Bartley Heath Pottery with his wife Lesley in 1974.

Since setting up Bartley Heath Pottery Mick has also done part time work as a thrower for Farnham Pottery, West Meon Pottery, and over the last 30 years for Grayshott Pottery making his own thrown and decorated range for their shop.

Mick now only work at home making a standard range of traditional domestic stoneware, some commemorative ware and one off painted pots. Mick makes his up own glazes and is at the moment enjoying playing with some new rutile/ash chun glazes recipes. 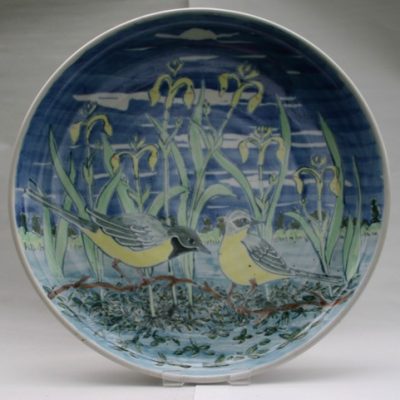