Martin Davey mainly paints in oils and picks the subjects of the countryside and city. He paints in a traditionally realistic manner and the pictures can vary in size from roughly A4 sized up to a 6ft in width. His main influences are Victorian painting and the 2oth century ‘Ladybird books’.

In 2018 he was the 1st place winner of the Southampton City Gallery open exhibition, with his painting ‘Winter shopping season Southampton’.

He also paints digitally on a computer tablet, often using fantasy and ‘dark art’ as subjects from his imagination. Originally Martin studied graphic design and had no formal painting training, later moving  in to the worlds of adversing and media  working in central London, and has provided artwork for TV, films, books and games. He currently lives in Southampton and is a member of the ‘Keepers’ artist Collective. 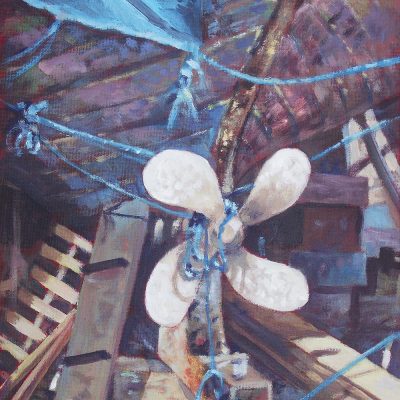