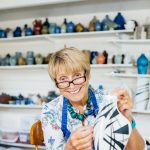 Gill grew up near Penzance, on the south west Cornish peninsula, an area where you are never more than four miles from the sea. The wind and tide sculpt amazing forms on the beach, leaving abstract forms, untouched by humanity. I like my pots to looks as though they have just been created by a turn of the tide.

Gill began studying ceramics at Redruth School of Art as part of her A’level  course. This was at a time when studio pottery was all the rage in Cornwall. Bernard Leach was working in St Ives, encouraging his apprentices to create  beautiful hand-thrown tableware and every little village seemed to have its own pottery producing work influenced by his ideas. Troika Pottery, also founded in St Ives, offered an alternative approach. The wheel was abandoned in favour of plaster moulds that were used to create wonderful lamp bases and vases with bright colours and bold abstract lines. Clay seemed to be a most exciting medium to in which to create.

Gill studied to become an Art  teacher at the University of Leicester and worked in secondary schools in Hemel Hempstead and Basingstoke for twenty six years. Gill loved teaching as it was great fun to throw out an idea to children and see it returned in ways you could never have imagined.

Since retiring, Gill has been able to concentrate on developing my own work. She built a studio in my garden and have been experimenting with a wide range of clays and construction techniques. Porcelain slab pots are her latest obsession! Gill creates them using a grogged porcelain clay, managing the drying process very carefully over several days and decorating them to create a contrast between interior and exterior surfaces. Gill likes the contrast between their shiny white interiors and the matt black slip, overlaid with fine dancing stripes to counterbalance the strong geometric lines.

Pottery allows Gill to discover and appreciate the natural world and there is always so much to learn. 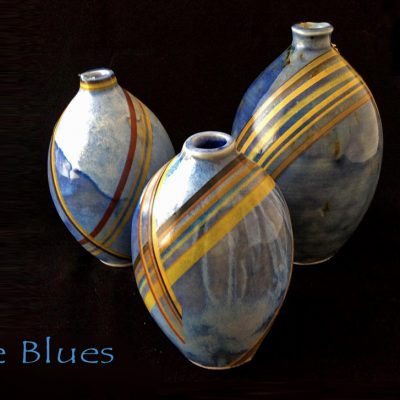